On Sunday February 18, 23 players battled each other for glory, $300 in prize money and rating points.

At the end of the four rounds Elio Arencibia finished clear first with 3 wins and 1 draw. 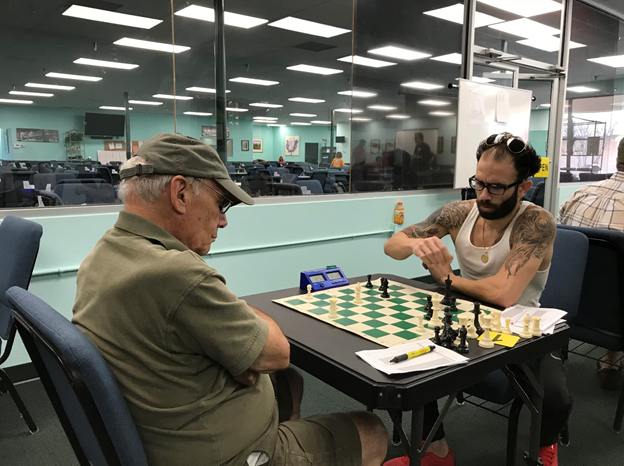 The game for first place between Remey Rubin (white) against Elio Arencibia (black). Elio is in the process of creating a mating net with Rg5-g2, Bc6-e8 followed by g7-g5 check and mate with the pawn. A nice finish!

Remey Rubin, an unrated player, won his first three games and caused a major upset in the third round by beating topseed and master Anatoly Offengenden.

Elio Arencibia had a great weekend. On Saturday he finished second in a tournament in St. Petersburg and combined with his win in Sarasota he gained 55 rating points. Congratulations.

There were 8 youth players among the 23 participants. It is a very positive development that youth players chose to play in a more serious setting and are not afraid to play experienced masters. Some youth players did have to get used to some of the official USCF rules of rated chess games like keeping score. Keeping score is mandatory in dual rated (quick and regular) rated tournaments. It is good practice as it forces to player to take a pause and think before you move, and it also makes it possible to analyze your game afterwards with your trainer or by yourself. Finally, without keeping score it is possible to make claims like a draw after a threefold repetition of the position.

The tournament has already been dual rated by the USCF. Rating changes can be found in the following link: http://www.uschess.org/msa/XtblMain.php?201802183032